Changzhou is a prefecture-level city in southern Jiangsu province. Covering a total area of 4,385 square kilometers, it had a permanent population of 4.7 million in 2014.

Located on the southern bank of the Yangtze River, Changzhou borders the provincial capital of Nanjing to the west, Zhenjiang to the northwest, Wuxi to the east, and the province of Zhejiang to the south. The city is situated in the affluent Yangtze Delta region of China.

Changzhou is in the monsoon climate area of north subtropical zone. The four seasons are distinct here, with damp conditions seen throughout the year, very hot and muggy summers, cold, damp winters, and in between, spring and autumn are of reasonable length. Its annual average temperature is 16℃, and the annual average precipitation 1034 mm.

Changzhou's traditional role has been that of a commercial center and in particular a distribution center for agricultural produce, which was shipped by canal to the north and later, to Shanghai. The city began to develop a cotton textile industry in the 1920s, and cotton mills were established in the late 1930s, when Japanese attacks drove many Chinese businesses to invest outside Shanghai.

The city has remained a textile center and the most important location in Jiangsu for weaving. It also has large food-processing plants as well as flour-milling, rice-polishing, and oil-pressing industries. After 1949 it also developed as a center of the engineering industry. Qishuyan, some 10 kilometers southeast of Changzhou, has one of the largest locomotive and rolling stock plants in China. Other engineering works in Changzhou produce diesel engines, generators, transformers along with agricultural and textile machinery. At the time of the Great Leap Forward in 1958 a steel plant was also built to provide raw material for heavy industry.

Up until now, Changzhou has remained one of the most developed cities in Jiangsu, ranked third after Suzhou and Wuxi. The city's GDP per capita reached 104,000 yuan in 2014. 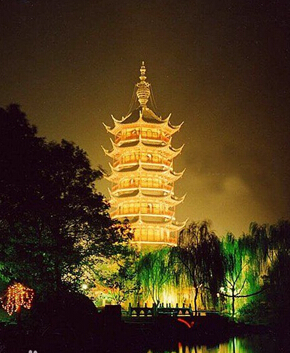 Changzhou is an ancient historical and cultural city with the recorded history of 3,200 years. In the late Spring and Autumn Period (547 BC), Ji Zha, the fourth son of King of Wu, Shoumeng, had Yanling as his principality, which was the beginning of the 2,500-year history with exact calendar and place name of ancient Changzhou. In the fifth year of Gaozu's reign of West Han Dynasty (202 BC), the place name was changed into Piling. In the second year of Emperor Wu of West Jin Dynasty (281 BC), it was reset as Piling Jun (County). From that time, governing as Jun, Zhou, Lu or Fu during the following dynasties, Changzhou had the names like Yanling, Piling, Pitan, Jinling, Changchun, Changzhou and Wujin, etc. In the ninth year of Emperor Wen’s reign in Sui Dynasty (589 AD), Changzhou had its present name. In 1949, the municipal government was founded.