The Chinese mainland, Hong Kong and Macao called for deeper communication on higher education as a conference promoting talent exchanges got underway in Nanjing, Jiangsu province on April 18.

More than 120 education chiefs and university representatives from the three sides attended the ceremony. 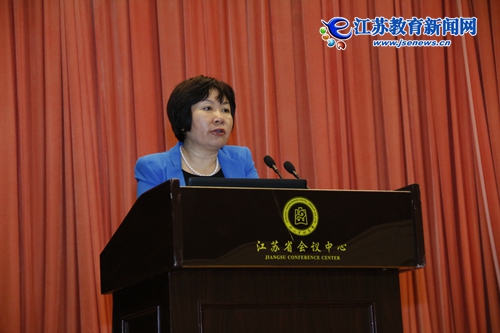 Liu Jin, director of the Hong Kong and Macao Affairs Office of the Ministry of Education, speaks at a conference promoting talent exchanges between the Chinese mainland, Hong Kong and Macao in Nanjing, Jiangsu province on April 18. [Photo/jsenews.com]

Liu Jin, director of the Hong Kong and Macao Affairs Office of the Ministry of Education, spoke highly of a multitude of cooperative achievements on higher education over the past few years, especially the National Special Support Program for High-Level Personnel, also called the 10,000-Elite Program, which was initiated in 2012 and is now the most important bridge connecting students and teachers from the three sides.

It not only helps the students broaden horizons, enhance academic levels and gain practical experience, but also boosts their recognition of the state, the nation and systems of governance.

The students in attendance saw the program as very fruitful, many mentioning that the experts were awesome and the lectures down to earth.

By the end of 2016, the program had established 1,618 projects, attracting some 35,000 students and teachers from Hong Kong and Macao to carry out exchanges in fields like legal education, history, economics, arts, medical science, and architecture.