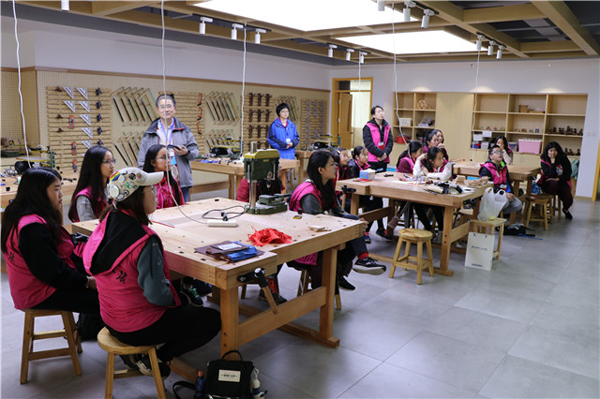 The ancient cultural precincts in the city of Suzhou, in Jiangsu province welcomed a group of overseas Chinese teenagers recently, inviting them to sample some of its most fascinating antique aspects.

The students were from countries such as the United States, Canada, Australia and Japan.

Wearing virtual reality glasses and walking along on the centuries-old Pingjiang Road offered a novel experience to the teenagers. They lingered around the historic sites there, including Sipo Bridge, which was named from a nunnery in the Tang Dynasty (618-907).

A student named Lin Chen apologized about being  poor at speaking Chinese and the fact there were not  chances to practice it. Lin said the VR trip down the ancient road offered a way to learn and understand Chinese culture and really appreciate it.

Wu Yulin, an inheritor of paper-cutting, an intangible cultural heritage, guided teenagers to run wild with their imagination while using their hands and fingers. They jointly created many vivid rats, one of the 12 traditional Chinese zodiac signs, which is the symbol of 2020.

They also made wonton, a specialty popular along the lower reaches of the Yangtze River and weighs the same to local residents as jiaozi (dumplings) is to people in the northern parts of China.