All is well, said international students in Jiangsu

Statistics from the Jiangsu Provincial Department of Education show that as of Feb 12, not a single confirmed or suspected case of the novel coronavirus pneumonia had occurred among international students studying in Jiangsu, among which 7,645 were staying at their school and 736 were staying in other Chinese cities. 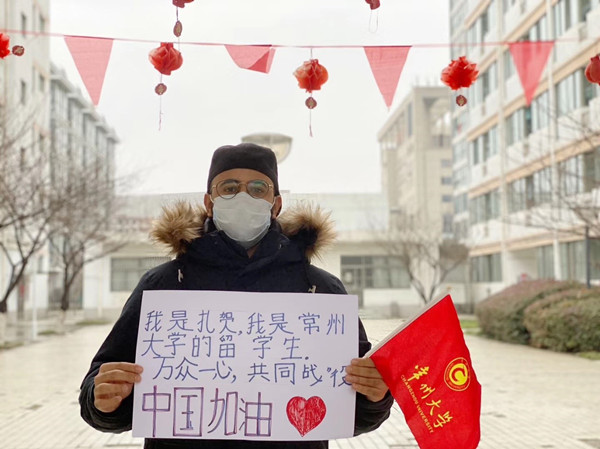 Zha He, an international student from Changzhou University, holds up a sign to support China in its fight against the epidemic. [Photo/jschina.com.cn]

"I've seen on the news that more and more patients have recovered and been discharged from the hospital in recent days, which is really good news," said Zha He, an international student at Changzhou University.

Just a few days ago, the young man, whose Chinese is still at a low level, was confused and worried about the school's sudden restrictions on leaving and entering the dorm, as well as the daily temperature-taking and disinfecting of rooms.

His anxiety was alleviated by teachers posting the latest information about the epidemic on WeChat, a Chinese instant messaging platform. They shared helpful prevention measures and even offered daily necessities.

Behavior like this was also seen at 84 other Jiangsu colleges and universities, which were all guided by the provincial epidemic prevention and control work group and have been communicating with international students every day to learn of their whereabouts, arrange plans, and share reports on the outbreak in multiple languages.

Nanjing Forestry University established a student information system, which requires the head of every dorm to deliver a report on student conditions and whereabouts to the head of each building, then to the house parents, and finally to teachers in charge of international student affairs.

"The system changes every day and I have hundreds of messages to answer every day," said Zhang Ying, a teacher at the university.

Nanjing University of Aeronautics and Astronautics has been maintaining contact with its 565 international students throughout the outbreak, nearly 400 of which are living in dorms. By obtaining first-hand information on the students' whereabouts, the school has convinced over 50 students to cancel travel plans and around 20 students to end their trips early and return to Nanjing ahead of schedule.

"I'm fine," said Xiang Guosong, a Cambodian student at the Yangzhou Institute of Technology, to his parents via WeChat. "The school is safe and I believe everything will get better soon."

Xiang said that the help offered by the school and teachers left a deep impression on him. On Jan 29, his friend Zhao Lan, a student from South Africa, had a sudden high fever of 39.6 degrees Celsius. He was taken to the hospital by teachers and determined to not be infected with the novel coronavirus.

"I really appreciate my school, this is so heartwarming," said Zhao in his WeChat moments.

Hina, a Pakistani student who is in the third year of her doctorate program at Nanjing Forestry University, also thanked her school.

She was planning to return to Pakistan for the winter holiday but her flight was canceled when transferring in Urumqi. The poor girl also lost her passport, putting her in a precarious situation.

Hina was assisted by teachers at her school, who helped her report the loss of her passport to local police, allowing her to sly to Beijing for a temporary certificate and finally fly back to Nanjing.

"This is my home away from home," said Hina after arriving back at her school. She was quarantined for 14 days and provided with a stock of food that conformed to her religious preferences.