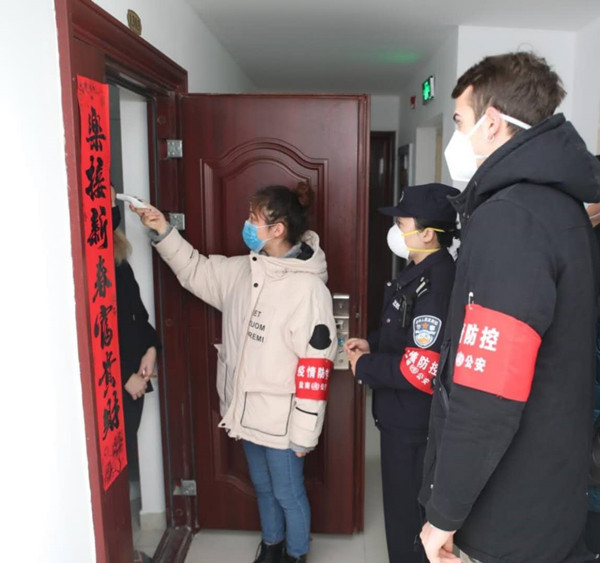 A team of eight international students volunteer in a residential community in Yancheng, Jiangsu province. [Photo/jschina.com.cn]

A team of eight international student volunteers from Yancheng, Jiangsu province were praised by local police officers as "the best foreign aid" to help prevent and control the COVID-19 outbreak.

One of the team members is a Ukrainian student with the Chinese name Ding Weiming. He has been living in China for almost two years and was also a volunteer in his home country.

"It's good to help others and I don't want to miss this chance," Ding said.

He assisted local police officers and government officials in communicating with foreigners, many of whom were new to China and whose Chinese and English skills were at a low level.

Just a few days ago, a student at a school near Ding's caught a cold and fever and was worried about possibly having COVID-19. Ding helped the student determine whether it was COVID-19 and he soon recovered.

Ding said he was impressed by the discipline and unity of the Chinese government and its people.

"Cohesion, patience, and trust in the government is how the Chinese will defeat the coronavirus. It also explains why the Chinese people are able to come together in such a short period of time," Ding said.

He said he will continue learning Chinese and help foreign students new to China learn about Chinese laws and regulations, which the young man thought was necessary for both the students and for social order in China.

A Kazakhstani student named Ning Na was also on the team. She said that international students could assist in overseas personnel management and she hopes to contribute as a thank you for the generous support she received from China and its people.

"The Chinese government and its people have done a great job, and everyone, regardless of their nationality or race, came together to fight the epidemic," the girl said.