Location: east part of the Chinese mainland and middle of Jiangsu province

Yangzhou is getting momentum to develop its economic strength in automotive, machinery, IT, tourism, construction, and food industries.

In 2019, Yangzhou recorded GDP of 585.0 billion yuan ($82.8 billion), a growth rate of 6.8 percent. Such increase was sustained due to the city's continuous optimization of industrial structure, with the industrial economy surpassing its transformational pace, service industry accelerating quickly, and modern agriculture maintaining steady progress. 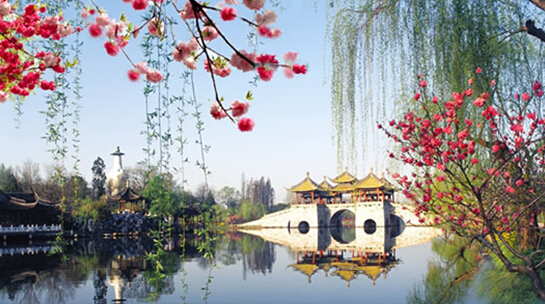 Historically, Yangzhou is one of the wealthiest of China's cities, known at various periods for its great merchant families, poets, painters and scholars. Its name (lit. "Rising Prefecture") refers to its former position as the capital of Yangzhou prefecture in imperial China.

Since 486BC when the King of the State Wu ordered the construction of Hangou River and Hancheng City, Yangzhou, as a city, as experienced a history of almost 2,500 years.

In the long process, Yangzhou has experienced splendid prosperity in the East and West Han Dynasties, the Sui Dynasty and the Tang Dynasty and during the reign of the Emperors Kangxi and Qianlong in the Qing Dynasty, leaving the footprints of a large number of well-known poets and scholars such as Libai, Du Mu, Bai Juyi, Ou Yangxiu, Su Shi, Zhen Banqiao and Zhu Ziqing and boasting over 340 historic sites and relics, which are under protection.