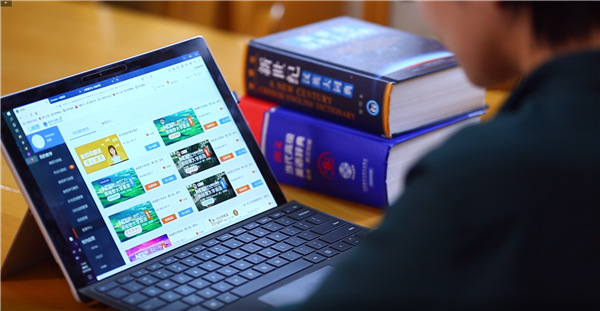 A teacher prepares a course on a platform by Waiyan Online. College students are encouraged to stay at home and study online due to the novel coronavirus outbreak. [Photo provided to China Daily]

As of March, the number of online education users in China had reached 423 million, up 110.2 percent from the end of 2018, according to a report on China's internet development released Tuesday.

The online education users accounted for 46.8 percent of the country's netizen population, said the report issued by the China Internet Network Information Center, adding the industry saw an explosive increase due to the COVID-19 epidemic.

Noting that the opening of schools across the country was postponed during the epidemic, the report said 265 million students switched to online courses, bringing the number of daily active users on multiple online education applications to more than 10 million each.

China's Ministry of Education has rolled out a series of measures to make the online education industry more standardized and systematic, noted the report.

The MOE has also launched 22 online course platforms with about 24,000 courses offered, ensuring students' access to classes during the epidemic.

Emerging technologies such as artificial intelligence and big data have been widely used in the field of online education, yielding positive results.

The commercial use of 5G will see more technical problems such as video buffering solved, according to the report.

In addition, the industry has strengthened cooperation with short-video platforms to cater to more young users, said the report, adding that in 2019 around 200 million education-related short videos were produced on Kuaishou, a leading Chinese online short video platform.