Growing number of foreigners in Nanjing apply for green cards 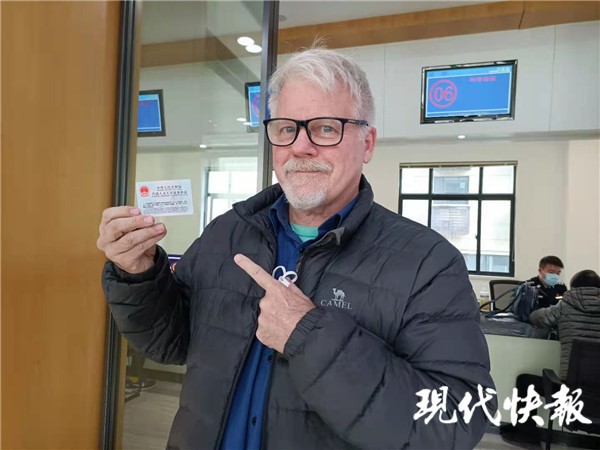 Richard Sears from the United States shows off his green card in Nanjing, Jiangsu province on Dec 23, 2020. [Photo/xdkb.net]

East China's Jiangsu province unveiled a service center for foreigners' work permits in China in Nanjing on March 30, bringing the total number of such centers in Jiangsu to 29, local media outlets reported.

Statistics show that over the past three years, the number of foreigners applying for permanent residence permits in Nanjing has increased by 2.5 times. The city ranked 7th on a list published by the Ministry of Science and Technology last year indicating the 10 most attractive Chinese cities for foreigners.

At the unveiling ceremony, several foreign students shared their ideas about living and studying in Nanjing.

Waqas Ahmed, a Pakistani student who is pursuing his PhD of Medicine at Southeast University, said that he was moved by the policies Nanjing issued for foreigners during the outbreak of COVID-19 last year. He then joined SEU's volunteer team, helping deliver meals, take express parcels, and give mental health advice to foreign students.

"I want to continue my doctoral studies at SEU and take my parents to live in Nanjing in the future," Ahmed said.

Danaboey Temurbek, a third-year student of international economics and trade at Hohai University, said that he thought Nanjing is a very open city. He added that he wants to live and work in China, especially in Nanjing, after graduation.

"I've considered many countries to further my studies and I finally chose China. I was inspired by my home country Uzbekistan taking part in the Belt and Road Initiative and my family engaging in international trade," Temurbek said.