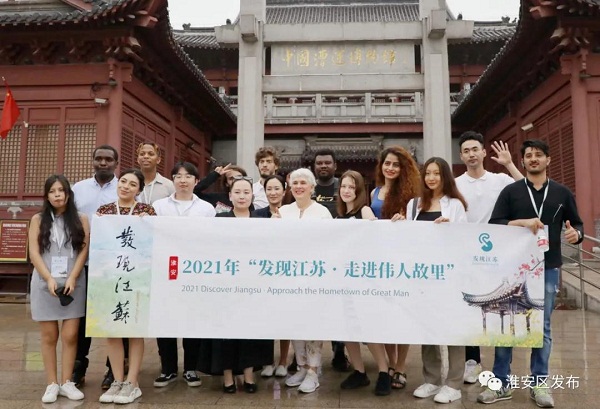 Expats take a group photo in front of the China Water Transport Museum in Huai'an. [Photo provided to english.jsjyt.edu.cn]

A group of expats from Venezuela, Mongolia, Kazakhstan, and South Korea visited Huai'an in East China's Jiangsu province from June 17 to 18 to visit the former residences of several iconic figures and to explore water transport culture.

At the trip's launch ceremony, they learned about the history and culture of water transportation from Li Qian, a scholar of Huai'an culture. They also enjoyed performances of intangible cultural heritage items, folk songs, and traditional folk painting art.

Leisbeth Coromoto Berrios Leon, consul general of Venezuela in Shanghai, praised the view in Wu's former residence and said that she believed that it aided Wu's imagination in creating the classic novel.

A South Korean student said that while he was studying in China, he learned that Premier Zhou Enlai was an important figure in the history of Chinese diplomacy and that he proposed the Five Principles of Peaceful Coexistence in negotiations with India.

When visiting the China Water Transport Museum, an Iranian student named Paksa said that she was impressed by the wisdom of the Chinese people and the importance of the canal, which was used to transport grain materials in ancient China.

The trip was part of the "Discover Jiangsu" series of activities organized by the information office of the Jiangsu provincial government, which aims to introduce Jiangsu to the world through the eyes of expats.