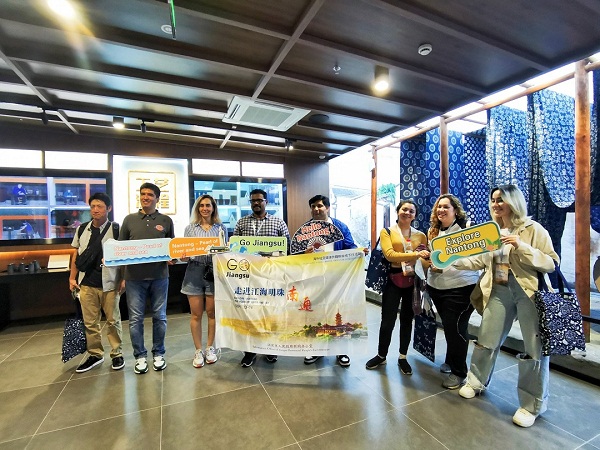 The group poses for a photograph at the Qidong Blue Calico Art Museum in Qidong, Nantong, East China's Jiangsu province, on Sept 13. [Photo provided to chinadaily.com.cn]

A group of nine expats participated in the "Go Jiangsu" Social Media Trip for Foreigners in Nantong, which is known as the birthplace of the national industry in modern China, from Sept 13 to 14.

During their two-day trip, the group from countries of Italy, Japan, India, Iran, Pakistan and Mexico got to check out the traditional culture of Nantong in East China's Jiangsu province, and learn about its modernization efforts.

Following their arrival in Qidong, a county-level city of Nantong, the foreigners were treated to local musical and tea art performances, experienced the local art technique of Qidong printmaking, and were presented with a blue calico scarf as a souvenir.

Qidong is hailed as "home of blue calico in China". This technique has a history of more than 1,000 years.

Mukesh Mohanan, an Indian visual designer, said he was deeply impressed by the ancient art form and that he would adopt its designs into his graphic works. 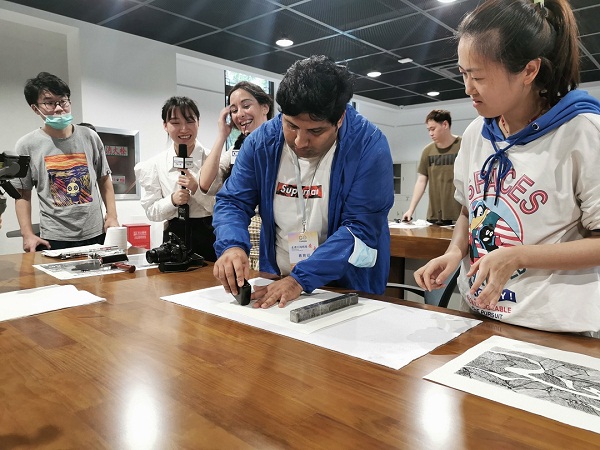 One of the expats tries Qidong printmaking in Qidong, Nantong, East China's Jiangsu province, on Sept 13. [Photo provided to chinadaily.com.cn]