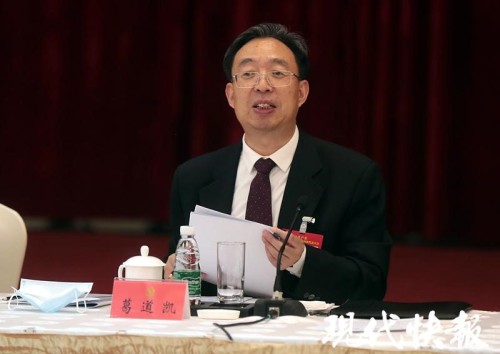 Ge Daokai is the director-general of the Jiangsu Provincial Department of Education. [Photo/Jiangsu Education Department]

In a meeting with representatives from Jiangsu's universities and research institutes on Nov 24, Ge said that the province will continue to follow the leadership of the Communist Party of China and focus on educating knowledgeable and virtuous students.

According to the director-general, Jiangsu will in the next five years add or rebuild 1,000 kindergartens, 800 schools that provide compulsory education, as well as 300 high schools.

Efforts will also be made to ease the burden of excessive homework and off-campus tutoring on students. One hundred percent of primary schools and middle schools in Jiangsu now provide after-class services, said the director-general.

In the 13th Five-Year Plan period (2016-20), Jiangsu led the nation in education development, said Ge. The province has added and rebuilt over 2,500 kindergartens as well as more than 2,000 schools that provide compulsory education during the period. In addition, over 460,000 students were admitted to high schools, 130,000 more than four years ago.