The Memorial Hall of the Victims in Nanjing Massacre by Japanese Invaders in Nanjing, East China's Jiangsu province held an activity on March 5, which marked Learn from Lei Feng Day.

Lei Feng was a Chinese soldier hailed as a role model of selflessness, modesty and dedication.

The event was attended by the memorial hall's volunteers, who are called purple grass volunteers. Six foreign volunteers rang the peace bell together.

One of the volunteers, a Namibian girl who studies at Southeast University, has uploaded many videos about Nanjing's history, tourist attractions, delicacies and culture on her YouTube channel, which has more than 150,000 subscribers. She expressed hope that more people would learn about the history of the Nanjing Massacre and recognize the importance of world peace.

Zheng Tian, a volunteer from the Democratic Republic of the Congo, said he will do his utmost to prevent war. 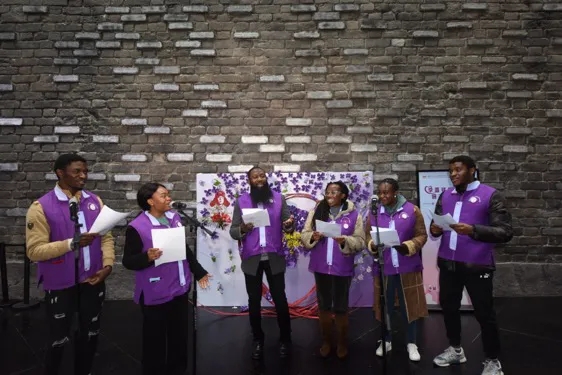 At a poetry recital held on the same day, six foreign volunteers performed the song Heal the World. One of the singers from Nigeria said that just like the song says, every person should take on the responsibility of making the world a better place, opposing war and pursuing peace.

As of March 5, the purple grass volunteer group had 22,984 members who had volunteered a combined 1.1 million hours. Formed in 1994, the group offers healthcare services to survivors of the war, guides visitors during exhibitions, and translates historical materials.