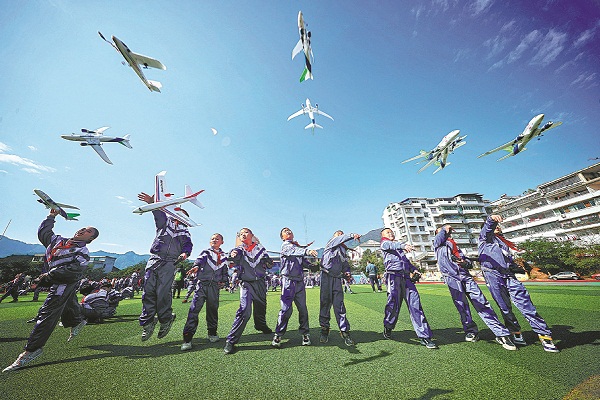 All provincial-level entities have revised their regulations governing extracurricular tuition and related activities.

The fact that "double reduction"－shorthand for alleviating the twin burdens of homework and private extracurricular tuition on primary and secondary school students－was chosen by netizens as one of last year's hottest online phrases reflects the significance of the new policy.

In the annual list of the 10 most popular phrases used by Chinese media, "double reduction" ranked sixth. The hottest was "100th anniversary of the founding of the Communist Party of China".

The organizers of the list－the 16th in the series－included the National Language Resources Monitoring and Research Center and the Commercial Press publishing house.

The guideline, issued in late July by the general offices of the CPC Central Committee and the State Council, China's Cabinet, ordered all private academic tutoring institutions to register as nonprofit organizations and barred them from raising money from the public.

The policy also forbade such institutions from holding classes at weekends, during national holidays or winter and summer vacations.

It said local governments should not give approval for any new tutoring institutions to provide academic classes for primary and middle school students, and added that the number of such entities should be reduced considerably.

Public schools should also offer after-class services for students and improve the quality of classroom teaching to meet their demands, it said.

The guideline was aimed at "effectively reducing" the burdens of excessive homework and after-school tutoring on students within one year and to achieve "significant outcomes" within three.

The department is responsible for regulating private providers that target children from kindergarten to high school and for formulating policies on the establishment, content, course hours, employee qualifications and fees charged by such institutions, both online and offline.

It also guides comprehensive law enforcement on extracurricular tutoring and handles major issues in the sector.

Since the central guideline was issued, more than 20 new measures have been issued by different government departments to fully implement the policy.