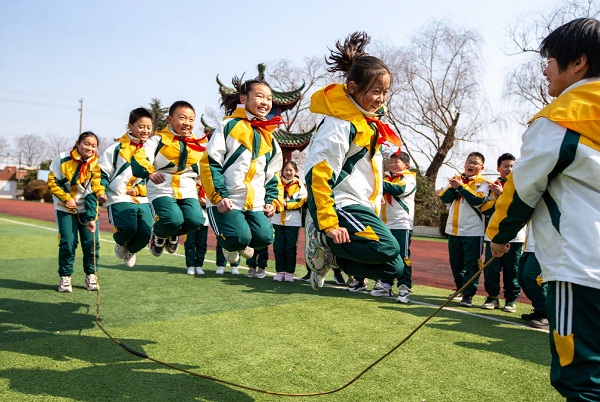 China has included reducing the academic burden on primary and middle school students in its annual Government Work Report, while also renewing its pledge to promote equal and high-quality education.

With 290 million students at schools and universities across China, the country must ensure that education, which is vital to millions of families and to the future of the nation, is properly run, the report, released on Saturday, said.

The country will continue to reduce the burden on students in compulsory education, the report said.

China will promote the high-quality, well-balanced development and urban-rural integration of its nine-year compulsory education system, allocate educational resources according to population size, and ensure that children are able to enroll in nearby schools.

The general offices of the Communist Party of China Central Committee and the State Council issued the "double reduction" policy in late July, aiming to ease the burden of excessive homework and off-campus tutoring on students.

According to the Ministry of Education, the number of offline tutoring institutions for primary and middle school students has been slashed by 92 percent and the number of online ones by 87 percent.

The ministry has listed the double reduction as one of its top priorities this year.

The policy has also become a hot topic during this year's two sessions, with lawmakers and political advisers weighing in on ways to further alleviate students' homework and extracurricular tutoring burden.

Li Youyi, principal of Beijing No 12 High School and a member of the National Committee of the Chinese People's Political Consultative Conference, said that as a teacher of more than 40 years' standing, she considers the double reduction policy the most high-profile education policy since the resumption of the national college entrance exam in 1978.

The average number of books borrowed by students from the school library has risen from less than two to five, she said.

The double reduction has cut back on unnecessary and repetitive academic burdens and promoted students' personalities, creativity, responsibility and ambition, Li said.

But he told Legal Daily there are still many problems in the implementation of the policy, such as local governments' varying standards and progress in regulation, and private tutoring institutions wanting to resume their business once regulation becomes less vigorous.

The Compulsory Education Law should be amended to include the reduction of homework and tutoring burdens, and making the regulation more long-term, standardized and open, Ma said.

Zhang Zhiyong, a deputy to the National People's Congress and education professor at Beijing Normal University, has submitted a proposal during the top legislature's annual session calling for a national campaign to root out education behaviors that focus only on short-term gains.

In the proposal, Zhang listed behaviors such as sensationalizing enrollment rates in the national college entrance exam; not following the national teaching schedule and ending new courses too early to prepare for important enrollment exams; violating the national curriculum and giving more course hours to academic subjects; and schools organizing tutoring courses during public holidays and weekends.

The Ministry of Education should lead the campaign and root out such behaviors and the progress should be included in the evaluation of local governments, schools and teachers, he suggested.