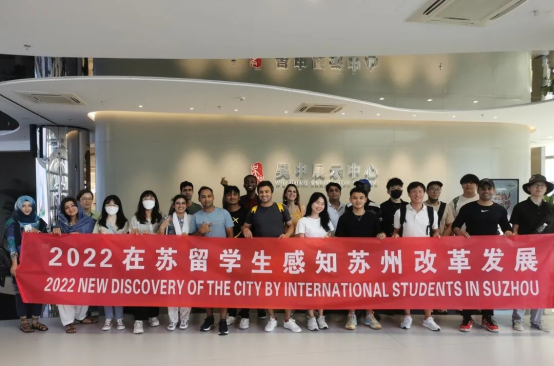 International students pose for a photo at the Wuzhong Exhibition Center in Suzhou, Jiangsu. [Photo/huanqiu.com]

An event aimed at teaching international students in Suzhou, East China's Jiangsu province more about the city's history and current development was held on Aug 4.

More than 20 students from about 10 countries, including Malaysia, Pakistan, Yemen, South Korea, Iran and Bangladesh, participated in the event organized by the Foreign Affairs Office of the Suzhou Municipal People's Government, Wuzhong district government, and International Office of Soochow University.

During the opening ceremony, books about Suzhou's economy, history and culture were distributed to the international students.

The students then visited the Suzhou Artisan Park to learn about the city's traditional handicrafts. They also went to the Wuzhong Exhibition Center, Dreame Technology (Suzhou) Co, and Wangshan village to further appreciate the city's natural environment as well as industrial and rural development.

Among the participants was an Indonesian student who studies at Soochow University and said that he will share his experiences and thoughts on Suzhou and China with more people through social media.