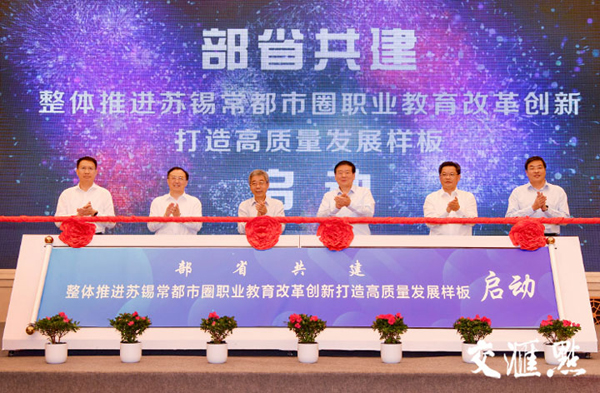 Suzhou, Wuxi, and Changzhou in East China's Jiangsu province initiate a program in September 2020 to jointly carry out reforms in vocational education. [Photo/jschina.com.cn]

Suzhou, Wuxi, and Changzhou in East China's Jiangsu province initiated a program last September to jointly carry out reforms in vocational education. Seven months on, what have the three cities achieved? Here are some clues.

As a pioneer in school-enterprise cooperation, Suzhou has set up 38 city-level enterprise colleges, 19 vocational education groups, and 672 provincial pilot projects.

One example is the Suzhou Institute of Construction and Communications. It has established vocational education groups for automobiles and rail traffic, 12 enterprise colleges, 18 provincial pilot projects, and cooperative ties with 112 enterprises in the Yangtze River Delta region. It has also been carrying out more targeted management explorations of emerging areas such as smart building and green materials.

Changzhou boasts more than 100,000 graduates from technical schools every year, 1,212 of which are considered high-end professionals. This is more than any other city in Jiangsu.

Xu Jianhua, a fourth-year student at the Changzhou Liu Guojun Vocational Technology College, is one such professional. He led the team that won the first-place prize at the 2019 National Vocational Students Skills Competition and is currently working in the research and development of a mobile application for an intelligent housing system.

Wuxi has become a leader of the "1+X certificate" and "credit bank" systems and has piloted such systems in 24 local schools. Meanwhile, as one of the first cities in China to adopt an apprenticeship system, its efforts in university-industry cooperation have been designated as a model by the National Development and Reform Commission.

For example, the Wuxi Institute of Technology has been focusing on technology-driven development and has cultivated teachers skilled at both teaching and research. A school-enterprise cooperative project, which was put into operation in 2017, has brought in a total of 28 million yuan ($4.30 million) in economic benefits.