Discover Jiangsu: Expats get close to traditional culture in Nantong 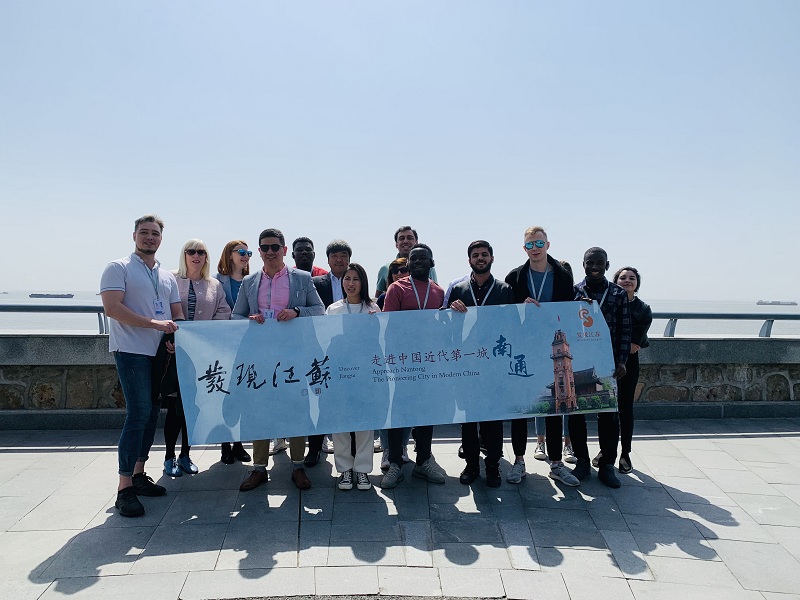 Expats take a group photo at the waterfront area along the Yangtze River in Nantong. [Photo/ntfabu.com]

A group of expats from Spain, Argentina, Russia and South Africa visited Nantong in East China's Jiangsu province from April 17 to 18 to taste local specialties and explore Chinese culture.

The trip was part of the "Discover Jiangsu" series of activities by the information office and foreign affairs office of the Jiangsu provincial government.

During the trip, the foreigners visited the Five Mountain area, Nantong Museum and Tangzha ancient town, enjoying cultural performances, such as the Rugao puppet show, and trying their hands at traditional soap and paper making and woodblock movable-type printing.

Carmen Fontes, consul general of Spain in Shanghai, who was on her first tour to Nantong, said that she was enchanted by Zhang Jian, a local industrial magnate and scholar in modern China, after visiting Nantong Museum and the Dasheng Yarn Factory, both of which were founded by Zhang.

"Zhang's commitment to developing industry, education and charity has left a bunch of treasures for Nantong city. It is also amazing that local people have been doing so much to worship and spread his spirit," said Fontes.

Andrew John Owen from South Africa, who is a resident of Nanjing, was astonished by the scenery in the waterfront area along the Yangtze River, while Roya from Iran was attracted by local handicrafts including dough figurine, palm fiber weaving and the banyao whistling kite.